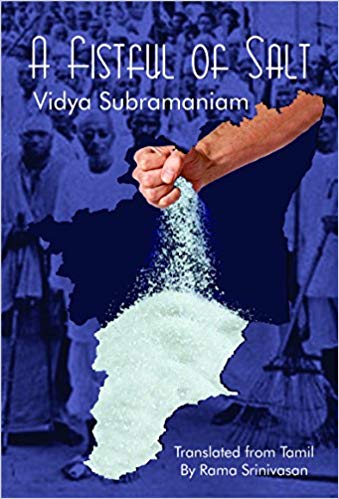 A Fistful of Salt

The participation of the South, especially Tamilnadu, in the Freedom Movement and allied protests under the leadership of Mahatma Gandhi has not been much documented. The 'Salt satyagraha' shook the conscience of the British rulers that it led to the Round Table Conference in the capital of the British Empire. The fact that Tamilnadu played a significant role in this unique kind of protest led by Rajaji has now been brought out in the form of a fictionalized narrative by the eminent writer Vidya Subramaniam. Although ''idealism' as against 'realism' has now become unfashionable in the field of letters, I hold the author in great respect for her daring to portray her characters in conformity with her own convictions. The 'period aspect' of the novel has come off beautifully in the atmospheric description and dialogues between the characters. This novel is a befitting tribute to those who participated in the freedom struggle.

Vidya Subramaniam has been writing Tamil novels and short stories for almost four decades. Born and brought up in Chennai, this 62-year-old writer has a hundred books to her credit and has won a slew of awards including a Tamilnadu State Award. An anthology of her short stories has been translated into English titled ‘Beyond the Frontier’. Two of her short stories have also been translated and featured in a book titled ‘Anthology of Tamil Pulp Fiction’. When she is not writing she wields the brush with as much finesse and elan as her pen. A self-taught artist, she has developed a penchant for the brush, lending a creative touch to her Murals. Vidya Subramaniam is her pseudonym and her real name is S. Usha