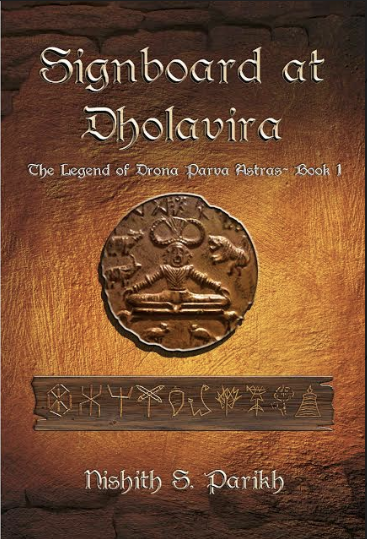 Hastinapur, 3100 BC: The Mahabharata war over, Arjuna urges Krishna to destroy the divine astras or weapons used at Kurukshetra. The weapons are instead hidden with their secret keepers handpicked by Emperor Ashoka to safeguard the secret of the astras.

Two Professors, from Archaeological Survey of India stumble upon a signboard at one of an Indus Valley Civilization site in 1999, flagging off an adventure where one of them falls prey to a Pakistani terrorist who is caught and lodged in a Punjab jail. Eighteen years later, the terrorist escapes, setting off a sequence of bizarre events where he takes a hostage and blackmails the surviving ASI professor to solve the unfinished mystery of the signboard.

The professor delves deep into mythology to find answers, helped by the young scientist son of his dead colleague. Joining the spine-thrilling chase is an American NASA scientist and a plucky army officer, Major Aarti.

Nishith Sharadchandra Parikh is a Chartered Accountant by profession currently associated with one of the leading Healthcare Companies in India. Reading and writing are his two absorbing passions.

In The Signboard at Dholavira, Nishith has blended his interest in Indian history and mythology to write a taut, unputdownable mythological thriller.

The Signboard at Dholavira is his first fictional work in the Legend of the Drona Parva Astras.