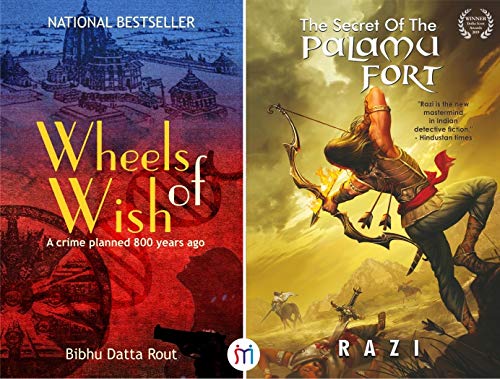 Someone has risen from the dead and is haunting the sinister ruins of the Palamu Fort and Imprisonment of a couple in the Dwapar Yug has created a mystery.

Buy Must Read Combo of 2 Best-Selling Historical Mystery Thrillers (The Secret of Palamu Fort + Wheels of Wish) and have a spine-chilling weekend!

Someone has risen from the dead and is haunting the sinister ruins of the Palamu Fort. An ancient curse has resurfaced and is asking for its share of blood.

A few hundred kilometers from the fort, in the capital city Ranchi, a Professor is murdered. The witnesses claim he was killed by a ghost!

The police is clueless. Inspector Patrick Minj ropes in Detective Robin Horo, who unearths a clue which indicates that the murder has a bloody trail running as far as 350 years. The ghost is leaving behind a trail of dead bodies and to solve the case Robin has nothing but an Artefact that is said to have an ancient curse over it and a centuries old riddle.

Imprisonment of a couple in the Dwapar Yug and the creation of magnetism at Sun temple in Konark has a great deal of linkage to a missing boy in the 13th century carrying the mightiest power of the universe that transcends in time across generations leading to an alleged rape and murder accusation to the story's protagonist, an investment banker Shashank Chaudhary in 2008 who flies from New York to Odisha to find himself trapped in an 800 years old enigma. A biological allegory that unfolds a historical and mythological mystery that counts back in time as far as the epic Mahabharata. One that surpasses time and the material world with its mathematical calculations within physical elements. Unexplainable evidences, puzzling data, conspiracy theories and unheard secrets intermingle with one another to create plots in the history of time that have been startling scientists and mythologists to date.