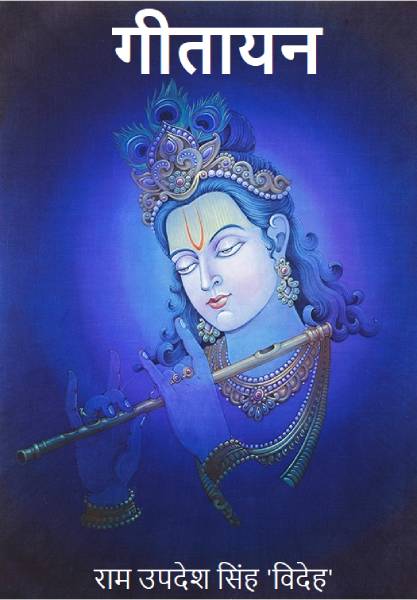 The Bhagvadgita, popularly referred to as Gita, is a part of the Indian Epic, Mahabharata believed to have been composed by Ved Vyas.

Gita is in the form of a sermon given by Lord Krishna to Arjuna in the battle-field of Kurukshetra. It consists of 700 shlokas (couplets) spread over 18 chapters, starting from the unwillingness of Arjuna to fight against his own kins in the battle, to his complete submission to the Lord after hearing His discourse on the Yoga of Knowledge, Duty, Devotion etc. in the successive chapters.

The first edition of Gitayan was composed, under some sort of a divine dispensation, by a former bureaucrat and poet, Ram Updesh Singh ‘Videh’, which is a shloka-wise translation of all the shlokas of Gita into felicitous stanzas of Hindi poetry, bearing the same serial numbers as the shlokas. This book has been widely acclaimed as a key to understanding the basic features of Gita.

The second edition of Gitayan is named Gita-Gitayan because every stanza of the translation has been shown opposite the corresponding shloka.

Ram Updesh Singh, is an IAS officer of 1961 batch who suddenly turned a poet in 1991, despite having come from the science stream. He grew up in the hinterland of Ghazipur in eastern UP. After his MSc (Maths) he entered and served in the IAS and retired from chief secretary post in 1996. He has some odd traits in his persona in that he has been a student of science by education, civil servant by profession, engineer by aptitude, artist and author by hobby and a poet by the Grace of God. For want of proper publicity, his works have not yet caught the attention of the people who matter.