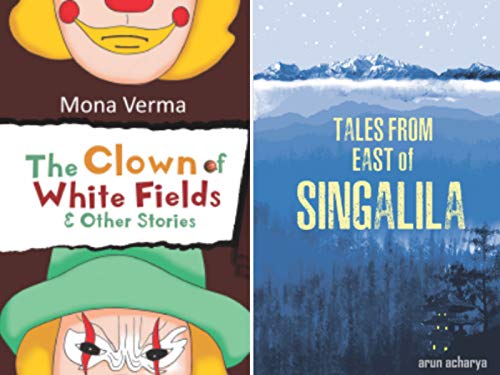 Combo of 2 Bestselling Children Short Story Books : Tales from East of Singalila + The Clown of White Fields & Other Stories

Tales from East of Singalila

Written with simplicity and poetic wonder that is so essential in a mystic tale in as far a natural way as possible. This magical series brings exotic tales shadowed from the Kanchenjunga Himalayas with the Singalila tang painted with a brush of mystique and fantasy. And takes you beyond the pale of kings and giants, flying horse, ordinary human beings, gods, fiends, trolls, monsters, birds, smart and helpful animals endowed with human speech, stern ways of a wise Buddhist Lama, strange friendships, and of the nirvana upstairs inside the snow mountains where paradise and the before world exists beyond ordinary imagination.

A select, come on journey into the epic world of fantasy woven with folk sentimentality. A highly recommended read! Language woven neatly with an elan that transports the reader to the intended fantasy world.

The Clown of White Fields & Other Stories

The Clown of White Fields is a collection of 7 stories set in various parts of the world, and a common thread of mysticism unites them. They are stories about children and people from small places who have a secret each. The enchanted world they live in, they are possessed by magic and the illusory world of dreams.

Be it Anatoly's special powers or Siom's hatred for his step mother, Oddvar's shame of poverty, Azec's magical circus or Ravana's soul wanderings; they all brave the oddities as time affords them clarity and strength. The book attempts to bring back the lost era of storytelling, with illusory and mystical undertones that a child's innocence craves for.